Dascha Polanco is a Dominican American actress best known for playing the character Dayanara Diaz on Orange Is the New Black.

Polanco was born in the Dominican Republic and moved to the United States at a young age. She was raised in Brooklyn and Miami by her father Rubén Darío Polanco, a mechanic, and mother Janet Polanco, a cosmetologist.

Polanco aspired to be an actress from an early age but “always doubted auditioning because of [her] weight”, and so she completed a bachelor’s degree in psychology at Hunter College. After college she began working in the healthcare industry with the intention to become a nurse. She was working as a hospital administrator at Montefiore Medical Center in the Bronx, while studying nursing, when her fiancé encouraged her to pursue acting again and paid for her registration with an acting studio as a gift. She attended BIH Studios in New York, which is where she was signed by the talent agency Shirley Grant Management. Her first acting credits were minor parts on the television series Unforgettable and NYC 22. 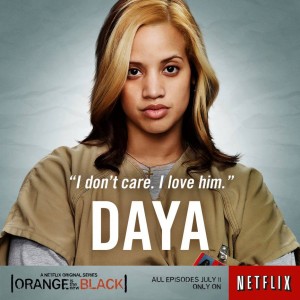 In 2012, Polanco was cast in the Netflix series Orange Is the New Black as Dayanara “Daya” Diaz, an inmate in a women’s prison; it was her first full-time acting job. Her character is the daughter of Aleida Diaz, portrayed by Elizabeth Rodriguez, who in real life is only two years older than Polanco.

Polanco subsequently appeared in the 2013 independent film Gimme Shelter before returning to her role on Orange Is the New Black for the show’s second season. In June 2014, it was announced that she had been promoted from a recurring role to a series regular for the show’s third season, which will be released in 2015. She will also appear in the upcoming comedy film The Cobbler, which is due to be released in 2014.