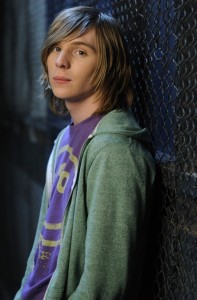 With his face plastered on every New York subway and city billboard across America, 2011 marked a milestone in young actor, Danny Flaherty’s, career. He was cast as the lovestruck and loyal friend, ‘Stanley,’ on MTV’s Skins, 17-year-old Danny Flaherty is getting used to the limelight.

Born and raised in New Jersey, Danny is the youngest of four, and with a father in the corporate world, a dental hygienist mother, and siblings interested in music, fashion, and directing, he is the only actor in his family. Growing up, Danny watched a lot of films and needed to channel his extra energy somewhere, so he began doing plays, where his passion for the art of acting grew. At just twelve years old, he started the auditioning process and took his first steps into the entertainment world, where he has been building a unique career from day one, with his sights set high.

When Danny is interested in something, he puts his whole heart into it; no holds barred. He has a true passion for films and entertainment, but his skills extend to sports and music too. When he isn’t acting, you can find Danny singing and playing guitar with his garage band, MF Killer Starfish. The band formed when its original members were in the sixth grade and they have been rocking ever since. With several original songs already in the works and goals to tour and record an album, they are currently jamming regularly and perfecting their sound. Adding to his musical talents, Danny even wrote a song for Skins, which was featured in the season finale.

In addition to music, Flaherty is a very talented and dedicated skateboarder, specializing in tricks and videotaping his achievements. To date, he can land the basic flip tricks such as, heel-flip, kick-flip, impossible, backside flip and triple kick-flip, amongst others. For those who speak skateboard, Danny has even 360-flipped a four stair.

He plays the role of Matthew Beeman on the FX series The Americans, has appeared in The Leftovers, Nurse Jackie, Unforgettable, Law & Order Criminal Intent, the Meryl Streep film Hope Springs, Paradise, Anatomy of the Tide, The Contest, and the upcoming films King Jack and The Adderall Diaries.