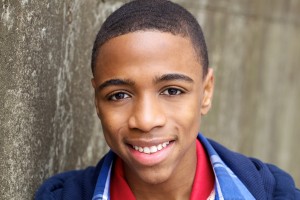 Young actor Chris O’Neal, is a star on the rise. Debuting on television in Nickelodeon’s How to Rock in 2012 marked a pivotal year in Chris’s career. Chris portrayed ‘Kevin Reed’, the constantly hungry and constantly sweating resident funny guy. ‘Kevin’ is also the drummer in the show’s featured band, Gravity 5.

Born in New York and raised in New Jersey, Chris is the second eldest of four boys and has always been a fan of acting and music. Playing drums since age 14, Chris has had the desire to be in the limelight since elementary school, and entered talent contests to feed his passion. At 14, he won New Jersey Show Stoppers, a local talent show where he landed his agent, springing Chris into the big time audition world. Now, at just 17 years old, O’Neal believes that every opportunity to perform is a chance to learn and grow as a person and he is ready to take the entertainment industry by storm.

Throughout school, Chris had always been the class clown, so comic timing came naturally to the ambitious teenager. When auditioning for ‘Kevin Reed,’ in How to Rock (based on the book series How to Rock Braces & Glasses) Chris knew he had to stand out from the pack. With a role asking for a rapper/drummer with strong comedic talent, Chris decided to create a unique drum beat and Nickelodeon rap to show the casting directors his passion for landing the part.

When he isn’t acting, Chris is an avid ping pong player and often challenges his castmates to games on set. With some of his favorites tv shows and films including Fresh Prince of Bel Air and Men in Black II, Chris is a huge Will Smith fan and would love the opportunity to work with him as his career progresses.

Some causes and charities close to his heart include the Make-a-Wish Foundation, the Big Brother/Big Sister program, and the actions of animal shelters.

Chris also co-hosts the Nickelodoen series Hey, Check this Out with his How to Rock co-star Noah Crawford.